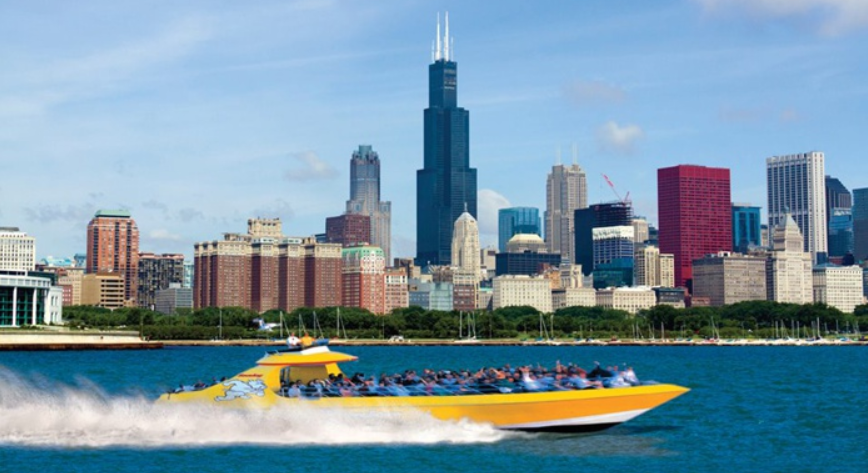 If you’ve been down to Navy Pier, you’ve probably seen the large, yellow Seadog boats. These have become a staple at Navy Pier and an experience that everyone should have! There are three different options that you can choose from: Lakefront Speedboat Tour, Seadog Extreme Thrill Ride or River and Lake Architectural Tour. Currently you can also get some great Seadog Chicago discounts on each:

“The lakefront speedboat tour ferries up to 135 passengers along the shores of Lake Michigan, passing such famed sites as Navy Pier, the Museum Campus, Grant Park, and the Magnificent Mile, while captains dispense enlightening tidbits about the skyline’s history and architecture. With speeds of up to 45 mph, the Seadog Extreme takes passengers on a thrill ride, on which two 1,400-horsepower engines move through slaloms and 180- to 360-degree turns. Alternatively, the river and lake architectural tour kicks off with a speedboat ride on the lakefront before passing through the locks and meandering through downtown and its opulent skyscrapers on the Chicago River. All tours depart from and return to Navy Pier.”

Your certificates for the Seadog Chicago discounts won’t expire until September 2014, so you will have all summer to take your ride. There is a limit of 8 per person, allowing you to bring the entire family. Also remember that you will have to make a reservation for your cruise beforehand. This is a fun way to see some of the Chicago highlights and your family will be talking about it for weeks – ours did!

One thought on “Seadog Chicago Discounts – Three Cruises To Choose From!”