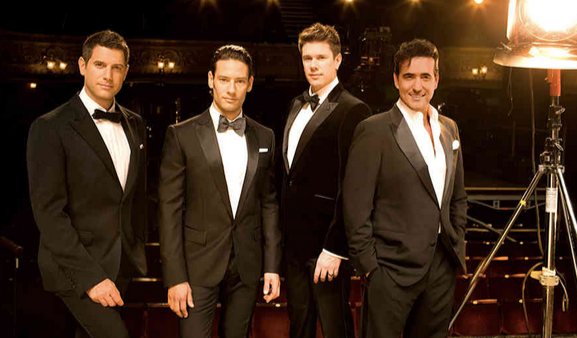 Il Divo is on their way to Chicago!  During their Musical Affair Tour they will be celebrating the “Best of Broadway.” Here is more about the group and this performance:

“Their voices are almost heavenly — and in fact their name translates to “divine male.” Formed in the U.K. by reality TV star and music producer Simon Cowell, Il Divo is a vocal quartet made up of French pop singer Sébastien Izambard, Spanish baritone Carlos Marín, American tenor David Miller and Swiss tenor Urs Bühler. Their harmonious sound earned this record-breaking classical crossover group almost instantaneous acclaim worldwide from millions of captivated fans. Their latest tour, named A Musical Affair: The Greatest Songs of Broadway Live, supports the release of their sixth album and features songs inspired by such Broadway hits as The Phantom of the Opera, Carousel, West Side Story, Mamma Mia! and more. The guys are no strangers to musical theater: Carlos was cast as Marius in Les Miserables when the show first premiered in Spain in 1993, and David played Rodolfo in Broadway’s La Boheme in 2003 — a show that earned seven Tony Award nominations.”

Il Divo Concert Discount: Currently you can get half off your tickets to see Il Divo at the Rosemont theater through Goldstar! They are offering $89.50 tickets for only $49 – a fantastic deal if you’ve been wanting to see Il Divo on tour! As with any Goldstar deals, there are a limited number of tickets available at this price.

One thought on “Il Divo Concert Discount – Half Off Tickets!”