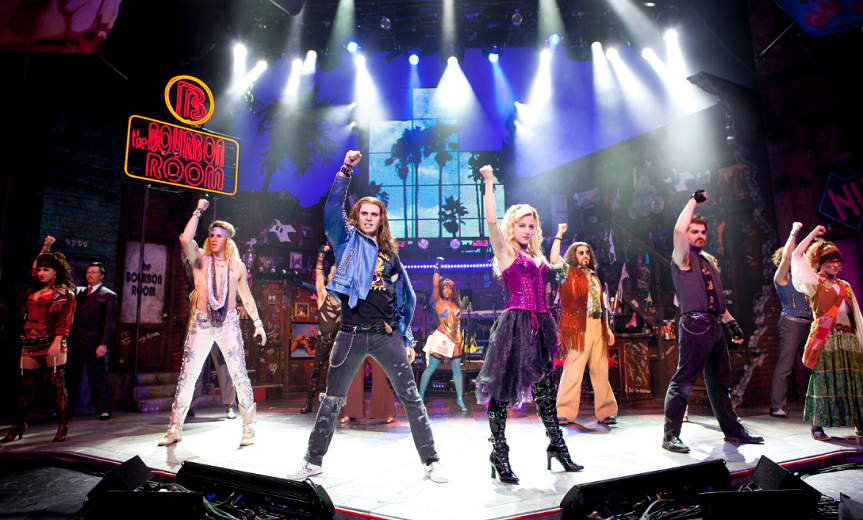 “Are we at the Bank Of America Theater or the Admiral Theater?” asked my smiling companion during the Rock Of Ages show last night. It was what I was thinking as well. Rock Of Ages takes you back to the late 80’s on the Sunset Strip where long and stringy or feathered hair was “the thing” and short shorts (or no shorts?) were everywhere. And in this show, half of the ensemble had also raided their local Frederick’s of Hollywood store.

Rock Of Ages Chicago Review: Rock of Ages was created in 2005 and is currently the 31st longest running Broadway Show. I know that you are all thinking about the movie that was released in 2012 (starring Tom Cruise, Diego Boneta and Julianne Hough), but I’m going to ask you to try put those thoughts aside for a minute. Rock Of Ages the stage musical is loud, fun, raunchy and entirely tongue-in-cheek. You spend much of the show bouncing your head to the songs that you’ve known for 25 years (“More Than Words,” “Oh Sherrie,” “Here I Go Again,” “Harden My Heart,” “I Want To Know What Love Is” and so many more) and trying so hard not to sing out loud, possibly embarrassing yourself. Of course, by the end of the show, everyone is singing along because you just can’t help it. 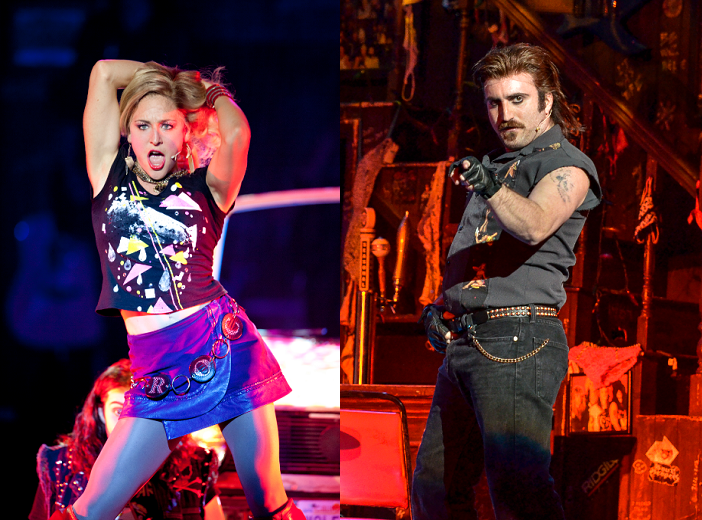 The first moment of the show sets the tone for the entire three hours. As the house lights begin to fade, stage lights streak down from above the stage and hit the crowd like a rock concert. The band is loud and ready to jam and the energy starts charging through the seats. You realize then what you’re in for. Next the cast begins to flood the stage, and in that moment (full of stringy hair and very scantily clad women), you feel the energy of the music in the floor and you are encompassed by nostalgia. The first act continued just like that – never letting up on the energy or the pace – and taking you through to the intermission. I don’t believe they ever finished a single song (or if they did, very few), but that didn’t matter because you flowed through that first act, laughing and jamming to the music that you know so well. The beginning of the second act was much slower than the first, but hang in there. The show ends with a great number.

All of the actors, singers and dancers were extremely talented, but there were a few who stood out. Andrew Sklar (as Lonny) was the bawdy MC for the evening. He had a blast with his role and the bit became hilariously infectious. Tanner Hussar (Franz) was a character that I wasn’t familiar with at all, as Franz wasn’t in the movie, but Mr. Hussar owned the stage when he was on it. The way he flourished got a well deserved laugh every single time he appeared. Lastly, Kadejah Onè had a voice that stopped you cold. Her powerful chords cut through you in a way that I don’t think I’ve experienced before. I’d be happy listening to her sing the phone book.

This is a show that might shock you right out of the gate, but give it a minute to find it’s footing. You won’t be sorry AND you’ll spend the next day singing all of the songs that you haven’t thought about in years.

Rock of Ages is here for one week only and will finish it’s run on 3/16. You can also get half price tickets over at Goldstar.

Interested in reading more Entertaining Chicago theater reviews? Go through all of them here.

One thought on “Rock Of Ages Chicago Review!”