The Goodman Theatre’s new show The Sign In Sidney Brustein’s Window is not only their new production, but the centerpiece of a citywide celebration for Lorraine Hansberry. The playwright – famous for A Raisin In The Sun – was able to see Sign premiere on Broadway three months before her untimely death at age 34. It was her final work and is not often produced. 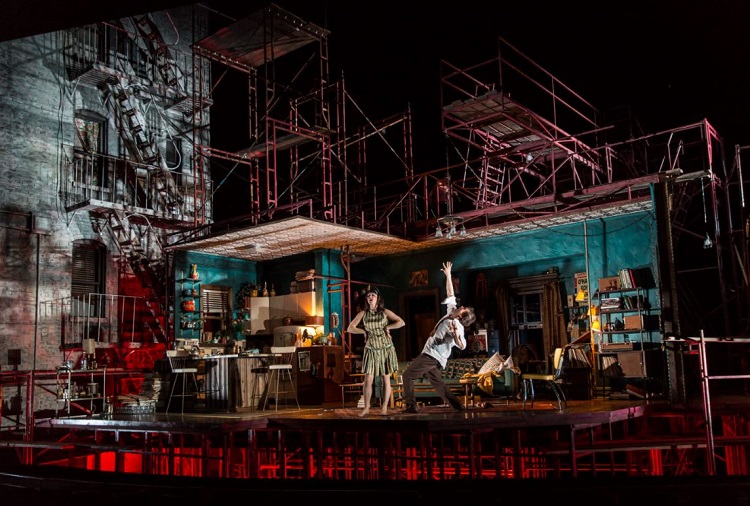 Goodman’s willingness to showcase this piece is a bold move, as much of the audience will be unfamiliar. That said, they attempt to dive in with vigor. The set for this production is nothing short of spectacular. With it’s construction-like, Escher-esque design surrounding the apartment of our main characters, the audience is wowed with everything that there is to see. The colors stand out, all pieces of the set are utilized (often representing different floors and fire escapes of the apartment building) and the details of the apartment itself help you to understand the couple who lives there. Unfortunately, the rest of the experience isn’t as attractive.

While some might feel that The Sign In Sidney Brustein’s Window comes at a time in our society where we are also experiencing heightened change and intolerance, it was tough to connect with the script. The story is about a mostly unhappy couple (with moments of wanting to love each other) who host a handful of friends and family throughout the show. The 2 hour 45 minute three-act play (two are before a 15 minute intermission, one follows) introduces you to three sisters (one of whom is a high-class prostitute, the second is our female main character and the third serves as the conservative). You also meet an activist (who is in love with the sister that he doesn’t know is a prostitute – he also happens to be African American, something that is not approved of by the conservative sister) and a writer (who also happens to be gay, and not approved of by the conservative sister) among others. And while there are a few amusing moments, it is very tough to care about any of them.

To be clear, it seems that the actors do the best that they can with what they are given, but I find the script to be very dry and bulky – so much so that you eventually give up trying. There are some poignant moments between characters, but these are moments to savor because there aren’t many of them. The sound, lighting and costumes also provide moments of interest, but I found myself desperately wanting more just to be able to connect with the show. With anything.

It is an honor for the Goodman Theatre to be hosting the centerpiece of the celebration for Lorraine Hansberry, so I can recommend this production if you want to try to connect with a piece of her glory. I hope you are able to find more of a connection than I was.