The Marriott Theatre’s new production of Evita will remind you of the great artistry that can be created by two musical geniuses like Tim Rice and Andrew Lloyd Webber. This is the story of Eva Peron, the fierce, driven and manipulative young woman (which was in itself a huge obstacle at that time) who changed the people and history of Argentina, if only through appearance and fantasy. The score is one that will stay with you for weeks and if you don’t have access to the music, you may find yourself searching Youtube (where you will promptly find it!)

Led by Hannah Corneau (with a strong presence and powerful voice), this is an Eva not to be trifled with. The vocal intensity that the role demands actually requires two leading ladies to play the part during the run (Eva is played by Samantha Pauly at various performances) and if you listen closely to the score, it is very clear why. While some of the score is lovely to listen to and easier on the voice, other pieces require what amounts to tension and almost screaming during a piece for intensity. If you get the result that I was fortunate enough to witness, you will thank them for resting their voices between shows. These moments are invaluable. (On a side note, even Patti LuPone had to share the lead of Eva in 1979 – a role for which she won the Tony.)

Austin Lesch has a sense of youth in his performance of Che that doesn’t always align with the angry and resentful words of the score, but he brings a powerful voice and endless energy to the show. (Look for several particularly standout moments during “And The Money Kept Rolling In” in the second act.) Larry Adams’ Juan Peron is full of emotion, awe and fatherly love for his Eva. While this role typically includes more manipulation with the people around him (including his wife), this was a refreshing take. Eliza Palasz’s Mistress (who singes the classic “Another Suitcase in Another Hall”) and David Schlumpf’s Magaldi each held their own in engaging portrayals.

One other thing to note about this specific performance is the personality and quick changes that come along with Eva’s costumes. These moments were sometimes as enjoyable to watch as the show itself! During the first several songs (most of which she is on stage), Eva goes from being a young, poor, starry-eyed girl at a show to dressing up for a trip to Buenos Aires to a young woman in a negligee who is sleeping her way to the top. We see more quick changes later in the show as well – all of which feel like fun little gifts to the audience. 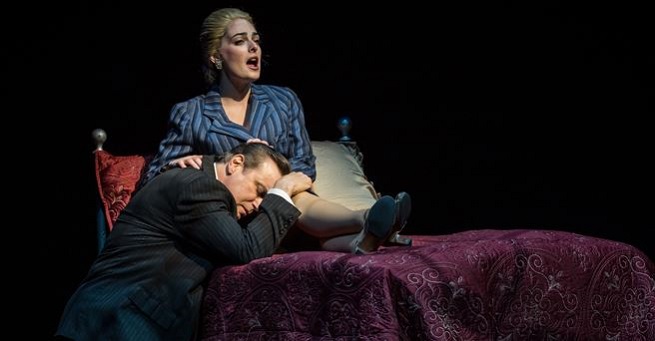 This is a solid production that will have you humming well into the next few days and you won’t be sorry. For a woman who passed at only 33 years old, she had quite a life – and you won’t be able to stop singing about it.