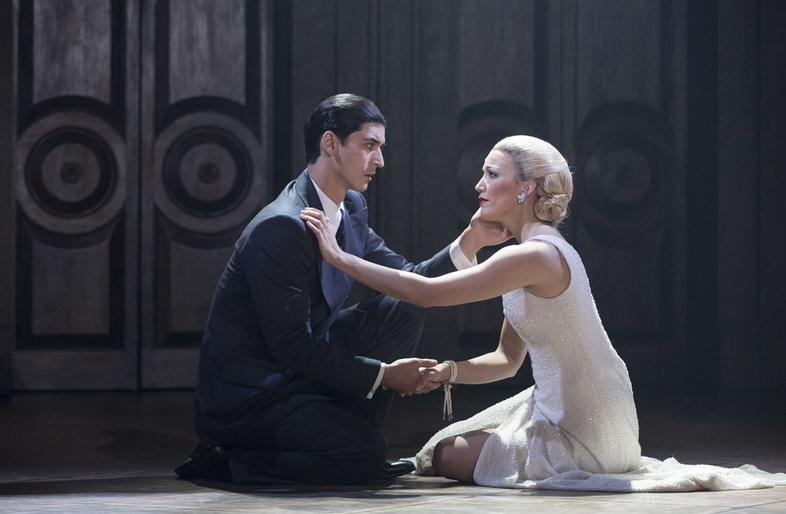 Oriental Theater September Chicago Evita 2013: Anyone who knows me well knows that I am a theater junkie. While I was raised on the likes of the Beach Boys and John Denver, more often than not there were musical scores being played in my house. Carousel, Pippin, A Chorus Line and more laced their way through my childhood. And that has never changed! I started taking my children to the theater when they were very small and have started a new “date” once per year (so far) when I take my son (almost 8 years old) to a Broadway In Chicago production.

I was recently invited to see the brand new production of Evita at the Oriental Theater. I have seen it performed in the past and also own the movie (Madonna and Anthony Banderas star), so I went in with both the knowledge of the show and if I’m being honest, some bias. I have never seen a live performance of Evita that felt cohesive. Where all of the story gelled and made sense. I was hoping that this would be the one that gave me that soul reaching experience that a musical can give you. And it did.

Chicago Evita 2013: This performance of Evita was absolutely stellar. From the first appearance of Che (Josh Young) singing “Oh, What A Circus” (a fabulous song), I couldn’t wait to hear him sing more. Mr. Young truly connected with both the lyrics and the audience from beginning to end. His voice was captivating and his musical inflections drove the story. I can honestly say that when he wasn’t on the stage, I was waiting for that next appearance.

The performance of Caroline Bowman as Eva Perón was just as enthralling. Eva is a truly difficult part because not only does she age from teenager (15) to about 33, but I’ve never seen a portrayal of Eva that I felt matched the woman that I imagine her to have been. Ms. Bowman captured that in spades. From her first appearance as a bright-eyed 15 year old, she owned the stage. She portrayed Eva as a strong, driven woman who knew exactly what she was doing on her rise to the top. And while the score lends itself to the telling of her story, this was the first time I’ve seen an actress not portray the vulnerability of the character until almost the end. This is the Eva that I have always imagined and Ms. Bowman embodied both her power and unshakeable drive.

Power is the word that I would say most captured the essence of the show. The choreography was beautiful and strong. The lighting (particularly when they filtered the lights through the windows at the top of the set and cast specific shadows onto the stage) was haunting. The principal characters were forces to be reckoned with.

For example, the first time Perón (played by a strong Sean MacLaughlin) met Eva displayed a forceful attraction that I had not seen before. It embodied a different kind of relationship between them that played through the rest of the show. Eva was not an eye-batting shyly-flirting woman as she’s often portrayed in that scene. She is a woman who is showing Perón how she can dominate both her own world and his. Through the choreography, he shows her that he is not dominated by anyone. It was a dynamic that I didn’t know I had been looking for until this show and it resonated right through the last scene.

I highly recommend going to this show and here’s how to do it on a budget! Broadway In Chicago seats can easily run for $90 if not more. If you’re interested in checking out Evita while it’s in Chicago (and you really should!!), you can find tickets on Goldstar for as low as $35! Make a date out of it and then tell me what you thought!

*Originally posted on Couponing For 4. Reposted with permission from the author.