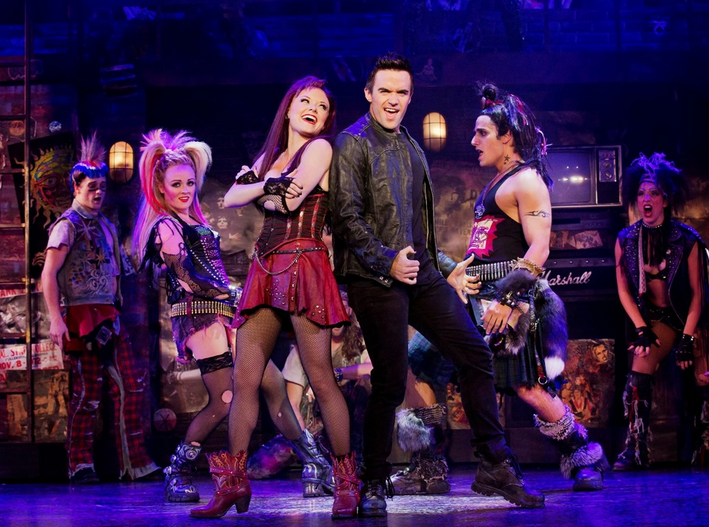 Oriental Theater Chicago 2013: I am going to come out an say it – I am a huge Queen fan. I love Queen covers, I love Queen music and I would happily and fiercely argue that “Under Pressure” is one of the best songs of the last century. Therefore, I was sure that the production of “We Will Rock You The Musical” by Queen and Ben Elton through Broadway in Chicago would be an amazing evening. It turns out I was only half right.

We Will Rock You is made up of a collection of Queen songs a la Mama Mia (Abba music) and Movin’ Out (Billy Joel music). I went into the We Will Rock You Chicago show having read no reviews, recaps or any other information, wanting to be able to experience the show with a completely clear perspective. As the theater first darkened, “Innuendo” started to play. We were met with a screen that explained a premise about how a digital wave had taken over the land and people were only allowed to listen to the music “prescribed” by higher powers. No real music was to be played or even discussed. Okay. I’m willing to go with that. The stage lights then flooded the audience to a degree that all of us covered our eyes. I’m not entirely sure what that was supposed to convey, but I do know that I (along with many of the other audience members) kept my eyes mostly closed until that opening act ended. I didn’t want to miss the rest of the show because I’d suddenly lost my sight.

The music throughout the show was consistent. The voices were good (and easily stolen by the vocal stylings of Brian Justin Crum who played Galileo), but the show was incredibly uneven. Our two antagonists (Killer Queen played by Jacqueline B. Arnold and Khashoggi played by P.J. Griffith) appeared to be a strange replication of Tina Turner from Mad Max and Flash Gordon respectively. This could have been thoroughly entertaining (and yes, they played the Flash Gordon song), but it seemed as if the show wasn’t in on the joke or the campiness. The majority of the time that these characters appeared on stage, the show fell flat. This was not as much the fault of the actors, but the show dynamic itself. One of my favorite songs “Fat Bottom Girls” arrived out of nowhere, with Killer Queen in a sexier outfit and all of her “minions” wearing very little and carrying phallic pink dusters. That scene never went anywhere and there was never an explanation for it. It was literally a vehicle for the song.

That being said, the other stars of the show were entertaining. Mr. Crum had a voice that made you want to spend the show listening to him sing an entire Queen playlist. His female counterpart (Scaramouche, played by Ruby Lewis) absolutely killed “Somebody To Love” and the couple did a great job with “Under Pressure.” There were a few standout scenes, one of which was when this young couple gave in to their feelings for each other during “Who Wants To Live Forever.” The lighting was intense and reflected beautifully off of the billowy smoke that slowly flooded the stage. When the guitarist entered the stage through the smoke, the crowd rightfully burst into applause. It was a fantastic moment.

I would be failing to mention the most entertaining part of the show if I didn’t discuss Buddy, the tie-dye clad hippie who reminded me of a 1960’s George Carlin. He was the comic relief and likely the most memorable and fun part of the show. It was a shame that it took 40 minutes to get to his real entrance, but once we were there, the show jelled in a way that it hadn’t before. And believe me – he really was worth waiting for!

All in all, I would say that if you want a night out with Queen, it is worth your time to see this show. The music is good (you already know that!) and if you are prepared for some of the oddities of the show, hopefully you’ll enjoy it a bit more than I did on first viewing. OH! And if you do see the We Will Rock You Chicago show, be sure to stay until after the curtain call! 😉