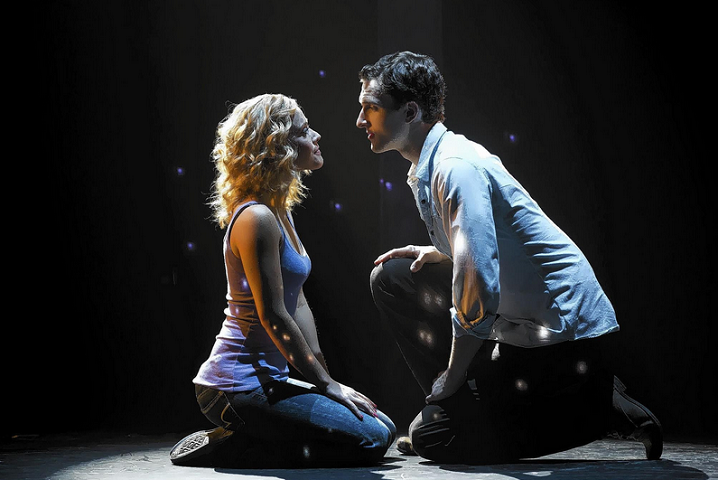 Oriental Theater Chicago 2014: As I exited the theater with the crowds of people who watched Ghost The Musical at the Oriental Theater this week, I noticed that the woman at the concession stand was waving a CD and reminding everyone that they could purchase a copy before leaving. And not one person did. That was a pretty good representation of the feeling that I got while watching this show – or rather, the lack of feeling.

Ghost The Musical Chicago Review: Ghost The Musical (starring Steven Grant Douglas, Katie Postotnik and Carla R. Stewart) is the same story of the famous movie starring Patrick Swayze and Demi Moore. A man and woman have a great love, do some pottery, he dies and they both have an emotional love affair with Whoopi Goldberg. I enjoyed the movie enough, but I was always bothered by the fact that the Demi Moore character Molly seemed to lack depth. I never really cared that she was sad. I wanted to, but I never connected with her. Unfortunately the entire two and a half hours of Ghost The Musical is the same experience.

The actors in the show performed well and performed earnestly. They had wonderfully powerful voices – when they could be heard over the music. Most of the louder numbers drowned out much of the singing, so the amazing belted notes are the ones that you heard. And they were great! That being said, none of the music resonated. There wasn’t one single song that you found yourself humming afterward and poor Ms. Postotnik sang one sad ballad after another. It’s just that they all felt the same. 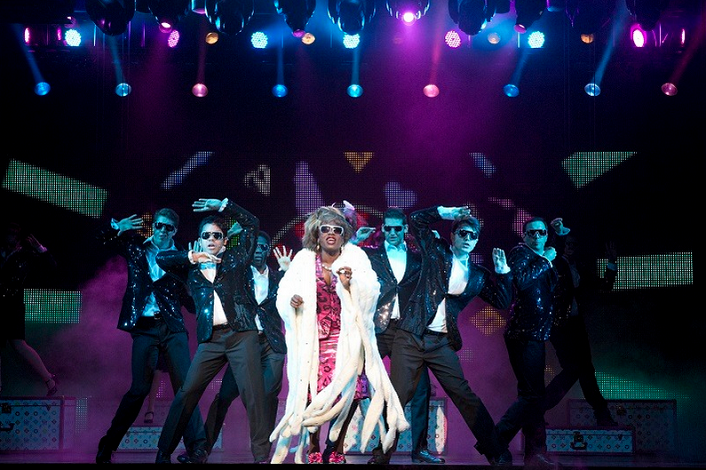 On a lighter note, Oda Mae Brown was hilarious from beginning to end. I could have done without her songs as well, but Ms. Stewart had a dynamic presence that made you want to watch her. Her grand musical entrance (along with her sisters) was fantastically funny and that is probably the only song I can truly say that I enjoyed and to which the entire crowd responded.

There was one area that I did think was remarkable and that was the lighting and special effects. Many of you will remember the scenes in the film where Sam has to learn to walk through a door and where he meets a man on a subway (“Get off my train!”) who teaches him to move physical objects. Those two scenes in particular were phenomenal to watch. I have my ideas of how they accomplished these amazing visual effects on a stage, but I don’t really want to know. As an audience member, it was an eye-opening pleasure to watch Sam slowly make his way through a door that by appearance (and some lighting) stayed intact. 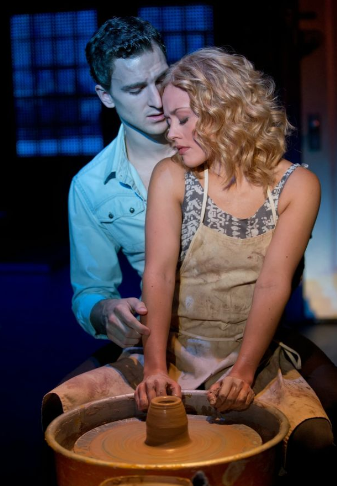 The train was a whole other experience. They had a movable set of train seats and railings on which many of the ensemble actors sat. As our “Subway Ghost” kicked and punched items out of people’s hands, slow motion and strobe lights would take over and these objects would float and spin through the air. It was my favorite part of the entire show, that two minute “dance.” Think of your favorite action movie that incorporates a car driving down the street at high speed and imagine all of the cups, papers and other extraneous items that fly out of the way of that car. Now imagine those items on a stage. It was fantastic.

There were a few other oddities that I won’t go into (like how there was periodically a group of people in either suits or street-wear performing like a dancing Greek Chorus, the constant attempt to make New York City another character by projecting fast-moving street and skyline visuals on background screens and how the song “Focus” performed by the Subway Ghost felt completely disjointed and like a sudden thrash-metal performance by Faith No More), but they left both me and much of the audience furrowing our brows.

All in all I would say that the actors did their jobs, the lighting, staging, costumes (I loved that the ghosts Sam met were a heavenly white from the chest up and regularly clothed below) and sets were effective, but the score and story were lacking. I won’t be seeing it again and I can’t recommend that you do either.